Scheduling Tour for The Chosen 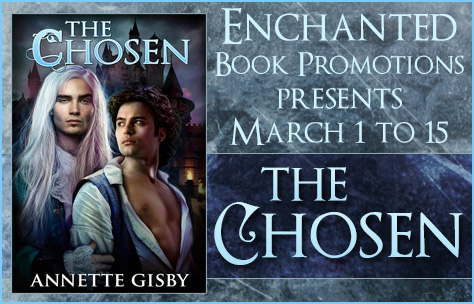 We’re scheduling a tour for male/male fantasy romance “The Chosen”. The tour runs from March 1 to March 15.

We’re setting up book reviews, book excerpt posts, author interviews, giveaways and guest posts for during the tour. There will also be a tour-wide giveaway for a $10 Amazon gif card. 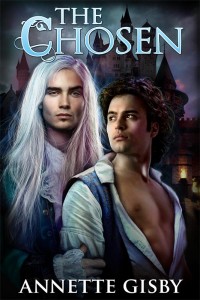 The neighbouring kingdoms of Oscia and Arcathia have been at a tentative peace for three years after centuries of warfare. Prince Severin of Arcathia has been brought up to put duty before all else and as the only son of the King and Queen, it is his duty to marry and produce an heir. His parents want him to marry an Oscian princess to cement that tentative peace. Unfortunately Severin isn’t interested in princesses. Now, if he had his pick of princes that would be another matter.

Havyn has been a slave all his life. When his aptitude for wizardry is discovered, he finds himself purchased and freed by Prince Severin and apprenticed to the royal wizard, Ildar. His duty is to stay chaste to keep his powers strong, but his feelings for Severin sorely test his resolve.

With kingdoms at war, the throne hanging in the balance, magic in the air, and outside forces trying to keep them apart, can the two men find happiness together, or is duty more important than love?

Annette Gisby grew up in a small town in Northern Ireland moving to London when she was seventeen. Being a very small town there were no bookshops and a small library. When she’d devoured every book she could get her hands on in the library, she started writing her own stories so she would always have something to read later.

When not writing she enjoys reading, cinema, theatre, walks along deserted beaches or wandering around ruined castles (great places for inspiration!) She loves travelling to distant places to see different cultures first hand, even though she gets travel sick on most forms of transport.

She currently lives in Hamsphire with her husband, a collection of porcelain dolls, cuddly toys and enough books to fill a library.

2 Responses to "Scheduling Tour for The Chosen"