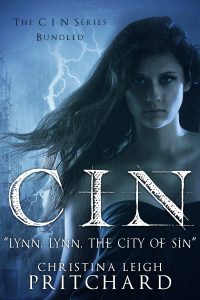 LIMITED EDITION! This offer will not be online once book three is released.

Now, you can own the limited edition of both CIN and TRAITOR, plus deleted scenes! Get ready for Ally’s Secret, book three! Order and email the other your receipt through the newsletter (http://www.christinaleighpritchard.com) and get all the short stories (all 12, plus the free bonus stories given through the newsletter).

The Doctor said I should be dead.

My heart beat furiously. I looked up at the flashes of lightning in the sky. Yes, I should be dead.

Seventeen year old Lisa Brown’s life is falling apart. First, her mother and father divorce, then their house forecloses and now, her mother has decided to commit herself to a psychiatric hospital.

If that weren’t enough, she must leave sunny south Florida to attend a boarding school full of geniuses in cold, Lynn, Massachusetts. The city where the locals chant “Lynn, Lynn, city of sin; you never come out the way you went in.”

And, they aren’t kidding. Lisa must live in a tiny shack with two strange teenagers, a dog named Pig who growls when you look at him and a cat named Rat. “Mind the cat,” everyone says. What the heck is wrong with this place?

Lisa thinks she’s landed in her own house of horrors with the anti-social Alex and his facetious sister Ally. But, the real drama begins the day she is struck by lightning…

Lisa thinks she knows everything about her new life. She can deal with the boundaries and even being torn away from her family. But Alex withheld more than she ever expected. Like, what happens when you lose control? How about when you begin to realize just how trapped you are? He leaves out a lot of stuff about himself too. He doesn’t mention the dangers of some of the others—or of what she herself can do…

Deleted scenes from the original version of Traitor.
Buy CIN from Amazon

Christina Leigh Pritchard was born and raised in South Florida. Her first stories were written at the age of nine in wide ruled spiral notebooks (which were supposed to be used for class) and in the various diaries she kept. Stories she wrote from age nine to twelve fill about four storage boxes!