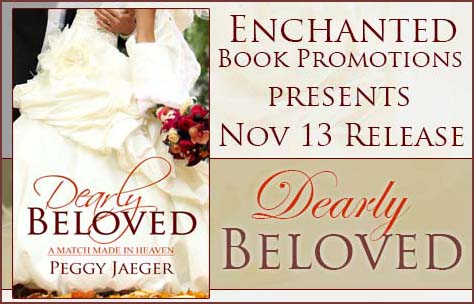 Please let us know if you’d like to host this, or the corresponding book tour.

Colleen O’Dowd manages a thriving bridal business with her sisters in Heaven, New Hampshire. After fleeing Manhattan and her cheating ex-fiancé, Colleen still believes in happily ever afters. But with a demanding business to run, her sisters to look after, and their 93-year-old grandmother to keep out of trouble, she’s worried she’ll never find Mr. Right.

Playboy Slade Harrington doesn’t believe in marriage. His father’s six weddings have taught him life is better as an unencumbered single guy. But Slade loves his little sister. He’ll do anything for her, including footing the bill for her dream wedding. He doesn’t plan on losing his heart to a smart-mouthed, gorgeous wedding planner, though.

When her ex-fiancé comes back into the picture, Colleen must choose between Mr. Right and Mr. Right Now.

Peggy Jaeger is a contemporary romance writer who writes about strong women, the families who support them, and the men who can’t live without them.

Family and food play huge roles in Peggy’s stories because she believes there is nothing that holds a family structure together like sharing a meal…or two…or ten. Dotted with humor and characters that are as real as they are loving, Peggy brings all topics of daily life into her stories: life, death, sibling rivalry, illness and the desire for everyone to find their own happily ever after. Growing up the only child of divorced parents she longed for sisters, brothers and a family that vowed to stick together no matter what came their way. Through her books, she has created the families she wanted as that lonely child.

Tying into her love of families, her children’s book, THE KINDNESS TALES, was illustrated by her artist mother-in-law.

Peggy holds a master’s degree in Nursing Administration and first found publication with several articles she authored on Alzheimer’s Disease during her time running an Alzheimer’s in-patient care unit during the 1990s.

In 2017 she came in 3rd in the New England Reader’s Choice contest for A KISS UNDER THE CHRISTMAS LIGHTS and was a finalist in the 2017 STILETTO contest for the same title.

In 2018, Peggy was a finalist in the HOLT MEDALLION Award and once again in the 2018 Stiletto Contest.

A lifelong and avid romance reader and writer, she is a member of RWA and her local New Hampshire RWA Chapter.