We’re scheduling a tour for urban fantasy “Edge of Death: Book Two of the Admiralty Archives”. This tour runs from November 10 to December 10.

Giveaway is for a print copy of the book. 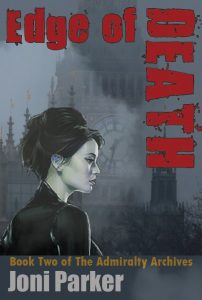 Title: Edge of Death: Book Two of the Admiralty Archives

In this second installment of The Admiralty Archives, the warrior Lady Alexin, the Keeper of the Keys for the Elf realm of Eledon, finds herself exiled to the harsh world of near-future London. Rendered little more than a political pawn by the Elfin Council of Elders to avoid a war with the Rock Elves, she has little choice but to struggle to find her way in this strange new land. Taken under the protection of kindly mentors, Vice Admiral Malcolm Teller of the British Royal Navy and his wife, Alex brings all her skills to the fore as she uncovers a series of deadly plots.

Murder is on everyone’s mind as an underground White Supremacist organization takes aim at Admiral Teller while two wizards, resurrected from death, must kill Alex in order to survive. To make matters worse, the Rock Elves dispatch a hundred assassins from Eledon with their sole mission to bring Lady Alexin to the very… Edge of Death.

Writing fantasy novels are Joni Parker’s passion. She’s completed two series so far: “The Seaward Isle Saga” and “The Chronicles of Eledon.” Her latest series, “The Admiralty Archives, is a three-book series that begins with the “Curse of the Sea.” The second book is called “Edge of Death” and the third will be finished next year. In addition to her novels, Joni enjoys writing short stories and has contributed two stories to the anthology, “Beyond Tucson: Adventures in the Multiverse” with her writing group. Joni retired from the U.S. Navy and the Department of Homeland Security and currently resides in Tucson, Arizona with her sister.