We scheduled a book tour for family drama / political thriller “The Inconvenient Unborn”. The tour runs from March 1 to April 1. 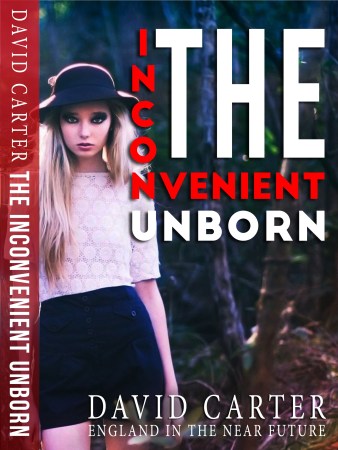 England in the near future –

The Cazenoves and the Wilsons don’t get along, leastways the parents don’t – the teenage kids adore each other, but when the oldest Wilson girl falls pregnant, sparks fly.

Donald Cazenove just happens to be Fred Wilson’s boss, but Fred isn’t without influence himself, being the senior shop steward, and the business is struggling anyway, and a strike could play havoc with Donald’s figures.

“The Inconvenient Unborn” is set in England in the near future where after years of austerity, a left wing Labour Party has been returned to power with a huge majority, and they now intend to change Britain forever. They have a mandate. They have conviction. They have momentum.

And then there’s a state visit to Britain by the most powerful man on the planet, Yuri Premakov, the Russian President, and his precocious and very beautiful film star wife, Tamara, bringing gifts of gas and oil and energy, at a price, and he’s scheduled to visit Lymington on the south coast, where most of this book is set.

So who wins out? The Cazenoves or the Wilsons, and what exactly are Yuri Premakov and his vast entourage up to in Britain?

“The Inconvenient Unborn” will take you on a journey you can barely imagine.

I have been writing for longer than I care to remember. Even as a ten year old child I would design my own newspaper and fill it with family news, much to my mother’s amusement when she once found a copy containing a story that she didn’t fully approve of!

My writing started seriously when I was in business and I was approached to write a column, and that developed into writing columns for newspapers and magazines in many fields, including computing, commodities, farming, property, sport, philately, business and small business, many of which I have actually been paid good money for, and that always brings a nice feeling that never goes away.

My syndicated online articles have now been read by over 300,000 people across the globe and show no sign of slowing down.

It was a fairly small step after that to writing books and I have now written more than a dozen, both fiction and non fiction, and I try to write and complete at least one full length book every year.

Like most writers and aspiring writers I have many more in the pipeline, both part finished, abandoned, or in an unedited state, and finding the time to complete them is always the big enemy there.

Ideally, I would like to find a literary agent who could assist me in taking my writing to the next level, so if you are out there and you like what you see and read then do please get in touch.

Besides writing I sell books for a living and currently have more than 10,000 titles in the house and please don’t ask me where they all are because the simple answer is that they are pretty much everywhere!

I am currently working on a new Inspector Walter Darriteau novel and after that I may go back to writing a sequel to Gringo Greene, though ordinarily I prefer to write something completely fresh, rather than revisiting old ground.

It always amazes me that someone like Lee Child can write book after book featuring the same character and similar adventures, though all best wishes to him for he has been incredibly successful.