Scheduling Tour for The Grim Spectre 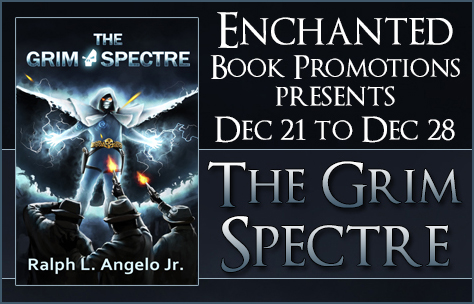 We’re scheduling a tour for crime fiction “The Grim Spectre”. The tour runs from December 21 to December 28. 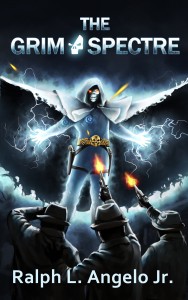 1937, the world on the brink of war. But in the city of Riverburgh, NY forty miles north of Manhattan there was a different kind of war brewing, it was a war of survival for the common man. A war against the gangsters and thugs who ruled the streets and against the corrupt politicians who turned a blind eye to the evil that ran rampant in Riverburgh.
In a city where everyone had given up hope and cried to the heavens for a savior, a savior had arrived. But was he heaven sent or a monster from hell? A grim, skull faced being who glowed with a terrible brightness. A monstrous creature who wielded twin .45 caliber pistol’s with a deadly and practiced aim, as well as strange and frightening powers that matched his terrible glowing eyes.
But would even the terrible Grim Spectre be a match for the forces the gang lord Phylo Zeus unleashed against him? Even if he was, would The Grim Spectre be able to withstand the attacks of the corrupt Mayor and his police force that dogged his every move? Caught between the twin forces of darkness encompassing the small city of Riverburgh, was The Grim Spectre too little, too late? Or can the supernatural avenger somehow defeat his many foes on both sides of the law while caught between the teeth of their vise of greed and corruption?
Find out within the pages of the New Pulp adventure, ‘The Grim Spectre.’ by Ralph L. Angelo Jr.

Ralph L. Angelo Jr., recipient of the 2014 ‘New Pulp Award’ for ‘Best New Author’ has written novels in the Sci-Fi/Space Opera, Sword and Sorcery, Epic Fantasy and New Pulp as well as non-fiction genre’s. Ralph has also written various stories in anthologies for different publishers in the New Pulp genre as well. In his spare time Ralph is an avid motorcyclist, skier, guitar player and martial artist. All of Ralph’s books can be found at http://RLAngeloJr.com

2 Responses to "Scheduling Tour for The Grim Spectre"