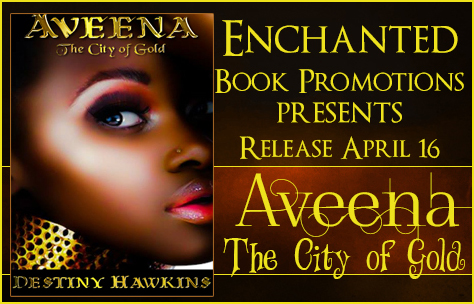 We’re setting up a release blitz for “Aveena: The City of Gold” on April 16.

We have .pdf and .mobi copies for reviewers. There will also be a giveaway for a signed poster during the release. 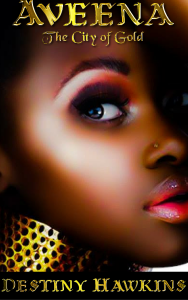 Title: Aveena: The City of Gold

What’s that light?
On a cold, dark night, Michael saw a light in the sky. At first, he thought it was a shooting star, what he didn’t know was that it was really a princess from another world. Unexpected occurrences left Michael with no memory of the mysterious princess…and in a completely different world, where color didn’t matter and people flew on air boards…Raluza.
King Lavier, King of Raluza, separated his kingdom into four quarters, separating his people by class. By now—five years after he met the princess—Michael was part of an organization of skilled fighters whose objective was to overrun the palace and restore Raluza back to the way it was.
His objective: give his family a new home.
The organization’s order: kill the Princess.

Destiny Hawkins lives in Cleveland, Ohio, and is majoring in Psychology at Kent State University with a minor in Creative Writing. When she isn’t studying she enjoys cooking, running, listening to music, and reading—plus, of course, writing! Her favorite genres to read and work in are fantasy, LGBT, and young adult. She’s been a writer since she was nine years old, but Caged is her very first novel with more to come!!