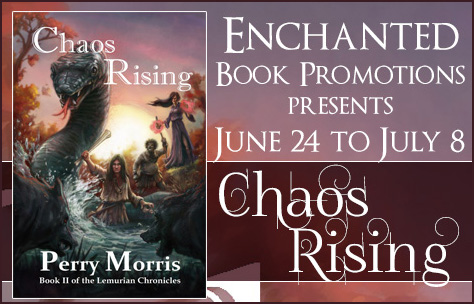 We’re scheduling a tour for “Chaos Rising”, the second book in the Lemurian Chronicles. The tour runs from June 24 to July 8.

During the tour, there’s a Kindle Countdown for the book. Please include this info (it’s in the media kit too) in your tour stop.

We’re setting up promo posts, book excerpt posts, author interviews and book reviews for during the tour. We have .pdf copies for reviewers. 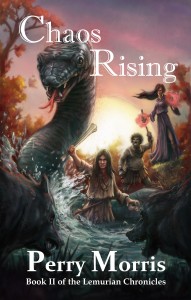 The Lemurian Chronicles by Perry Morris is an epic fantasy that began in 2015 with the publication of Children of the Blessing.  Readers all over the world have been enthralled with the gripping tale of Renn and Avaris—two boys who were marked by the gods to become powerful magic users.  Chaos Rising, the eagerly anticipated second book of the Lemurian Chronicles, continues the exciting epic story.

Avaris travels into the heart of the Cragg Caves—the home of horrifying beasts, warlocks and demons—to rescue his sister and best friend from slave labor in the mines deep underground.  But getting out of the caves alive is only the beginning of his troubles as he is hunted by an army of evil magic users and blood thirsty beasts who have been given the assignment to kill him before he learns to fully use his powers.

Renn (Demaris) is studying at the castle on Elder Island under the watchful eye and protection of the lore masters.  But a traitor is in their midst who is being blackmailed by Shamael Daro, the new Grand Warlock, to carry out a single task—eliminate Renn.

Shamael’s power has increased significantly since taking on the mantle of Grand Warlock and he discovers the dark secret of how the most powerful Grand Warlock of all time, Nefarian Drakkas, nearly took total control of Lemuria more than two thousand years ago.  He uses this secret to create a group of soulless, magic using spies and killers to do his bidding.  His plan is simple; create chaos across the land so the dark forces of the Aven lore can destroy those who follow the gods of light once and for all.

Perry was born and raised in the greater Salt Lake City, Utah area. He is very happily married and has seven wonderful children and one grand-daughter. Perry works for a large, publically traded, international company in Provo, Utah, where he manages supplier management, procurement and packaging engineering functions.  His first exposure to the great world of fantasy literature was, of course, J.R.R Tolkien’s “Lord of the Rings” trilogy, when he was fourteen. After that, he read the books of Patricia McKillap, Terry Brooks, David Eddings, Stephen R. Donaldson, etc…Currently his favorite author is Brandon Sanderson. He loves the unique and interesting magic systems Brandon creates, the memorable characters and interesting stories.

Perry is an author every day for an hour during lunch. He actually began writing the Lemurian Chronicles in 1993, and after more than two decades of rewrites, editing, re-editing, etc… finally decided to “take the plunge” and publish his epic fantasy. Don’t worry; each additional installment will be released no more than eighteen months to two years apart.

Thanks for you interest in Perry and his works.