We’re scheduling a release blitz for new adult “The Adulthood” on November 22. 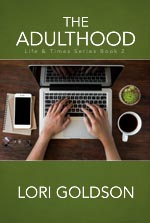 Buy from the publisher