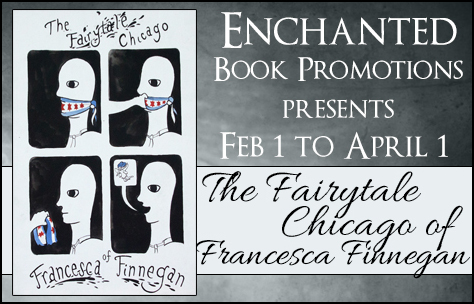 We’re scheduling a tour for fantasy “The Fairytale Chicago of Francesca Finnegan”. The tour runs from February 1 to April 1. 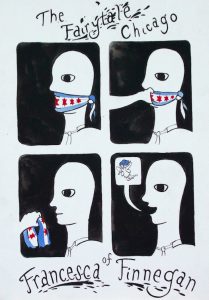 “Did you know most anything that matters in this city was built by magic before it was built by men? Of course you didn’t. This city is different from other cities. The true history of it is unpublished. Lucky for you, I know it all by heart.”

In Chicago, a secret L train runs through the mythical East Side of the city. On that train, you’ll find a house-cat conductor, an alcoholic elf, a queen of the last city farm, the most curious wind, and an exceptional girl by the name of Francesca Finnegan.

When we first encounter Richard K. Lyons, he is a man who has long forgotten the one night, when he was still a boy called Rich, when Francesca invited him aboard the secret L for an adventure though the East Side. The night was a mad epic, complete with gravity-defying first kisses, mermaid overdoses, and princess rescues. Unfortunately for Rich, the night ended like one of those elusive dreams forgotten the moment you wake. Now, Rich is all grown up and out of childish adventures, an adult whose life is on the verge of ruin. It will take the rediscovery of his exploits with Francesca, and a reacquaintance with the boy he once was, to save him.

Steve is a father, husband, uncle, brother, friend, and purveyor of fairy stories. He grew up in and around Chicagoland, where he still lives with his wife and two kids. He has been published in an array of strange and serious places, from the U.S. Chamber of Commerce in Washington, D.C., to Crannóg magazine in Galway, Ireland. This is his first book. He has an undergraduate degree in something he has forgotten from Illinois State University and a graduate degree in something equally forgotten from DePaul University. You can email Steve at Lavenderlinepress@gmail.com, or visit thewileymancan on Instagram.

Chris is an artist who studied at Columbia College Chicago. He is a Chicago native and has lived here all his life. Chris’s paintings have been showcased in many local galleries and beyond. When he feels like it, he travels elsewhere to find inspiration. You can reach him at Chris.cihon@gmail.com, or visit _ccihon on Instagram.