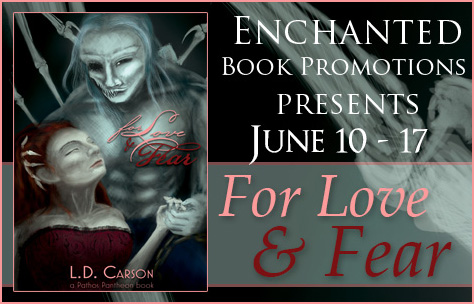 We’re scheduling a tour for paranormal romance “For Love and Fear”. The tour runs from June 10 to June 17. 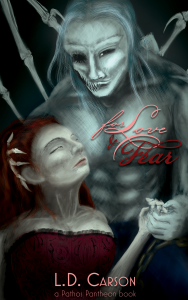 Title: For Love and Fear

Welcome to Pathoca, a land whose gods and magic rule over the realm of emotions and thought. But don’t be fooled, the mortals are not the only ones susceptible to their pathos.

After a brutal war destroyed everything he held dear, the god of fear has disappeared into hiding. But the persistence of one mortal may be the key to bringing him back to power. Are they both willing to make the sacrifices it will take?

Born and raised in an artistic family on the South side of San Antonio, TX, L. D. Carson has never been one to keep her imagination to herself. Entertaining anyone who would listen with fantastic tales of adventure through words and pictures became her favorite past time at an early age. This passion and dedication won her first publication in high school in a number of different poetry anthologies and a first place award in the Poetry Society of Texas. She went on to receive her BA in English from Texas A&M University in Corpus Christi. During her studies there she was invited to join Sigma Tau Delta, the university’s English Honor Society, and got weekly publication of a comic in the Island Waves Student Newspaper. In April of 2012, she began her foray into the world of self-publishing with her young adult novella “Fire in the Sky: Evolution,” and since then has completed a trilogy of that story as well as co-authoring a children’s book, “Snorkle the Fail Dragon.”

that story as well as co-authoring a children’s book, “Snorkle the Fail Dragon.”