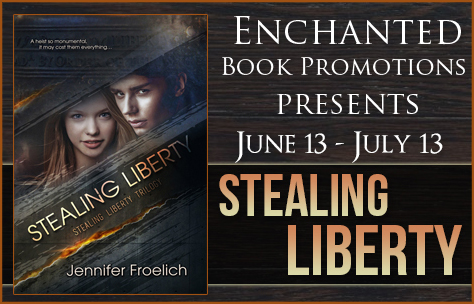 We’re scheduling a tour for YA novel “Stealing Liberty”. The tour runs from June 13 to July 13. 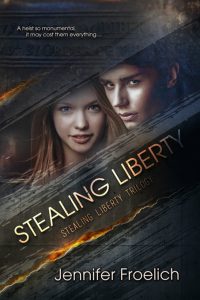 A heist so monumental, it may cost them everything… When Reed Paine is sent to a secret detention school for teens whose parents are branded enemies of the state, he doesn’t expect to find friendship – especially after coming face to face with Riley Paca, a girl who has every reason to hate him.

But when Reed, Riley and a few others start reading the old books they find in tunnels under the school, they begin to question what they are taught about the last days of America and the government that has risen in its place.   Then the government decides to sell the Liberty Bell and Reed and his friends risk everything to steal it – to take back their history and the liberty that has been stolen from them (Stealing Liberty/ Clean Reads).

Jennifer Froelich published her debut novel, Dream of Me, in late 2011, which reviewers praised as “well-orchestrated with outstanding imagery.” Her second novel, A Place Between Breaths, published in 2014, was called “a roller-coaster ride with enough twists and turns to keep everyone interested” and won an Honorable Mention in Writer’s Digest’s 23rd Annual Self Published Book competition. Jennifer is a frequent contributing author to Chicken Soup for the Soul.  A graduate of the Walter Cronkite School of Journalism at Arizona State University, Jennifer worked for many years as a freelance editor and writer before publishing her own work. She lives in beautiful Idaho with her husband, two teenage kids, and a rescue cat named Katniss.