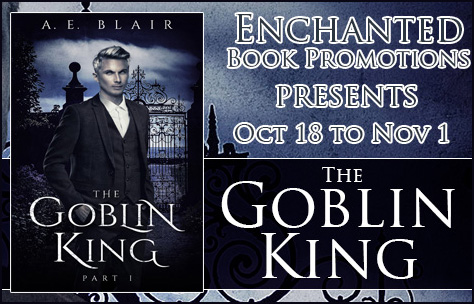 We’re scheduling a tour for LGBT romance / dark fantasy “The Goblin King”. The tour runs from October 18 to November 1.

Jasper Woodworth expects the summer of 1963 to be filled with thunderstorms and the comfort of his childhood home. He’s prepared for the attention of his doting mother, for dazzling parties, for whispered rumors of Briarford’s townspeople.

Everything changes upon meeting his mother’s new tenant: the mysterious and ethereal Harlan Winters. Harlan is entitled. He speaks in riddles, and he uses half-truths like bait on a fishing wire. What’s worse? He won’t explain himself, or his intentions, or his hypnotic interested in Jasper.

Overwhelmed by suspicion and a strange attraction, Jasper’s dreams take a turn for the unusual. He dreams of hands roaming his body. He dreams of Harlan’s warm, golden skin and those unearthly opalescent eyes.

Enabled by Harlan, Jasper finds himself tumbling down a steep cliff, rolling in his obsession and lust as they twist into something new, something he doesn’t understand. The only way to gather the answers he seeks is to confront Harlan directly, but how does one trap a supernatural entity?

A. E. Blair is currently setting her keyboard alight with typing speeds in Orlando, Florida, but she’s been writing ever since she could hold a crayon upright on construction paper. Inspired by 80s fantasy movies and anime, she’s often dreamed of spiriting herself away to another world – and becoming supernatural royalty certainly wouldn’t hurt.

While A. E. is no stranger to writing, having gotten her start with fanfiction, The Goblin King: Part I is her first novel, and is expected to span six parts. In her spare time, A. E. likes to dabble in screenwriting, playwriting, and acting.

Buy the book on Amazon.

One Response to "Scheduling Tour The Goblin King"