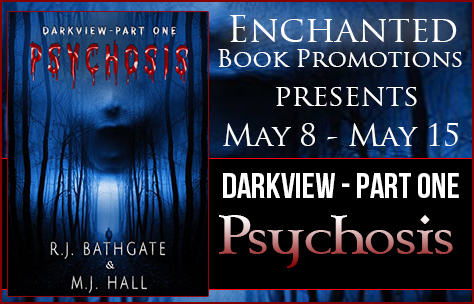 We’re scheduling a tour for paranormal / horror “Darkview Part One: Psychosis”. The tour runs from May 8 to May 15.

We’re setting up book reviews, book excerpt posts, promo posts and author interviews for during the tour. We have .pdf and .mobi copies for reviewers. 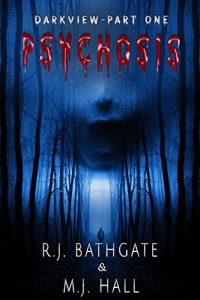 The sleepy, isolated spot bears a sinister, horrific history, shrouded by a chilling secret. A secret one man must unveil, which will ravage his soul … and sanity!

Jack Cyrus is in damnation!

After witnessing the 1994 Rwandan Genocide, he has become plagued by dark memories and devilish visions, the result of post traumatic stress.

After returning home to Scotland and compounding his trauma, he is faced with the sudden death of his wife, from cancer.

On the sixth anniversary of his wife’s death, Jack receives a cryptic, hand written letter from her, telling him she is still alive. Suffering and held captive, she pleads with him to return to Darkview, the place she spent her last days, and rescue her from purgatory.

Upon arrival in Darkview, strange things start happening, and what appears to be a centuries old mystery, starts unravelling itself.

Jack must piece together the clues and lost fragments of his sanity to solve the unravelling mystery.

Is any of it real, or is it just a manifestation of Jack’s mind, or another facet of his schizophrenia?

R.J. Bathgate, born and bred in Scotland, is the creator and co-author of Darkview: Psychosis. A father of two, and enormously proud of his heritage, he has studied psychology, social sciences, and is currently working towards an advanced diploma in psychotherapeutic counselling and hypnotherapy. His heart lies with new experiences and an interest into the unknown, particularly with writing. He has travelled the world from the dusty, wildlife-filled plains of Zambia, to the glaciers of Alaska, and the soaring peaks of the Canadian Rockies. He is extremely fond of NHL ice hockey, video games, good films, fine wine, and Jack Daniels. He originally wrote Darkview as a screenplay when living in Canada, but upon returning to Scotland, researched mental health issues, namely psychosis and schizophrenia. Inspired by this research, he brought in his lifelong friend, M.J. Hall, to help create a more realistic take on Darkview. The result is a story that combines traditional Scottish history with real life, catastrophic world events, told through the eyes of the protagonist, Jack Cyrus.
M.J. Hall was born in Stockport, Greater Manchester, at the turn of the eighties. Despite being born in England, he identifies more with his ‘adopted’ country, Scotland – he’s lived there since he was four, and his late maternal grandfather was Scottish, too. He presently lives in Edinburgh and is currently studying Environmental Science at the Open University, but has always dreamed of a career in music or writing, or both. He is vegetarian, loves animals (especially cats) and is devoted to his black and white moggy, Tahlula. He humbly admits being just a small voice in a big chorus, and his life changed for the better, or at least would never be the same, when his lifelong and best friend – R.J. Bathgate – invited him to collaborate on Darkview.