Scheduling Tour The Immortal Seeds: A Tribute to Golden Treasures 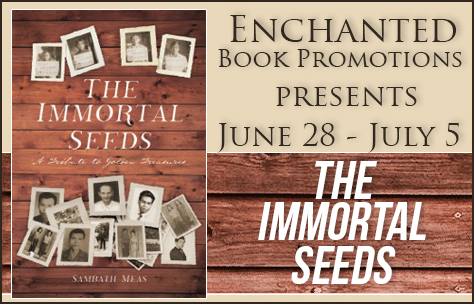 We’re scheduling a tour for family memoir “The Immortal Seeds: A Tribute to Golden Treasures”. The tour runs from June 28 to July 5.

We’re setting up book reviews, book excerpt posts, author interviews and giveaways for during the tour. Giveaway is for an eBook copy of the author’s other book, “The Governor’s Daughter”. 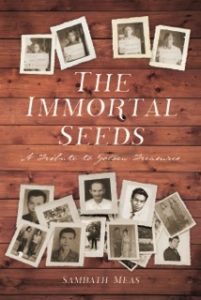 Title: The Immortal Seeds: A Tribute to Golden Treasures

This is a story about a father’s dream of escaping a war-torn country in search of stability and freedom, so that his children can live and thrive.

Sarin Meas, who was born and grew up in a remote village in Trangel, Kampong Chhnang, drifts from one place to another in search of a purpose, and a better life. In Pailin, a small town in western Cambodia known for its richness of gemstones, he meets a poor and uneducated girl whose daily life, from dusk until dawn, is strained by hard work: selling fruits and vegetables at the local market, along with cooking, doing laundry and cleaning up after strangers and relatives whom her aunt has taken in. If she doesn’t do her chores correctly and one of them tells on her, her aunt, a woman whose mood changes like a person suffering from a split personality, hurls foul language at her and beats her with any heavy object in sight. Sarin realizes that this young woman, whom everyone calls Thach, will die if she continues to live like this. So he marries her out of compassion. His compassion turns into love. Sarin and Thach form a family.

Tragically, after fifteen years of peaceful existence and independence from France, Cambodia gets sucked into the war of idealism between the world’s super powers—America, China, and the Soviet Union—by way of the Vietnam War. Cambodian leaders and people take sides. The Khmer Republic (backed by the United States) and the Khmer Rouge (backed by China, the Soviet Union and Vietnam) fight each other acrimoniously. After five years of battle, the relentless Khmer Rouge soldiers emerge victorious. Sarin has an opportunity to escape to Thailand with his family, but chooses to remain behind out of fear of the unknown. Soon he realizes the victors don’t know how to manage the country. Fear, paranoia and revenge turn them and their supporters into a killing machine.  Sarin, through cleverness and luck, helps his family navigate the horror of communism. When a second opportunity arrives, like thousands of other surviving Cambodians, he takes the chance to venture to the unknown—to find freedom, opportunity, and a better life for his family.

The Immortal Seeds: A Tribute to Golden Treasures is not only about the continuing of a family’s life cycle; it is also about a father’s idea—a purpose—that gets passed on to his daughter. In turn she hopes to pass it on to people not only within her community but also around the world.

“King Grandfather would like to wish that your memoir The Immortal Seeds will become successful.”

“The Immortal Seeds is a story of war, love, and the unbreakable bonds of family. Touchingly told, Sambath pays homage to her family across the generations, and shares how they helped the Meases to survive the war and thrive in peace.”

—Loung Ung, author of First They Killed My Father and Lucky Child

“The Immortal Seeds exhibits a memoir’s emphasis on highly personalized, if not fully contextualized, experiences.” 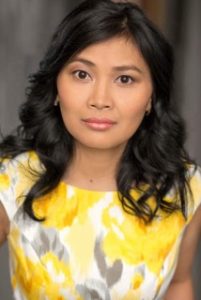 SAMBATH MEAS was born in Pailin, Cambodia at a time of civil war. Having survived the effects of the Vietnam War, the Khmer Civil War, and the Maoist-inspired Khmer Rouge regime, her parents decided not to stick around for another phase of mass killings. Her family, like thousands of other

Khmers, fled to the Cambodian-Thai border in 1979. After being displaced in refugee camps for two years, Chicago became their new home in 1981. Meas graduated from Loyola University of Chicago with a B.A. in political science and is taking writing classes at Northwestern University. She has worked in the legal industry for over 19 years and contributes to the richness that is Chicago literature. In her spare time, she helps novice writers to get started with their stories. Her current projects include self-help, science fiction, graphic novel, and young adult fantasy books. She writes fiction, focusing on murder mystery, fantasy, and science fiction; and nonfiction, focusing on memoir, biography, and self-improvement.

You can follow the author at the following sites: