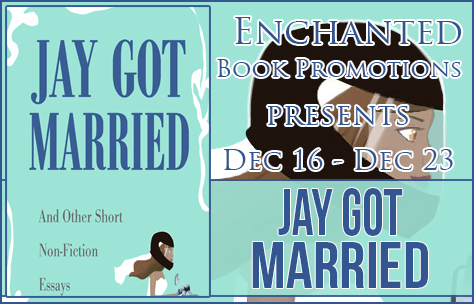 We’re scheduling a tour for non-fiction / humor “Jay Got Married”. The tour runs from December 16 until December 23. 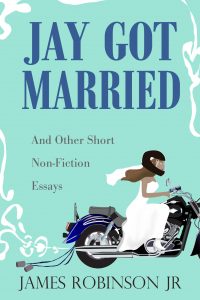 Jay Got Married consists of 9 humorous and, at times, poignant essays chronicling the ironies of everyday life in word and picture. Take for example the lead essay, aptly titled, “Jay got Married,” where I find myself mired in a horrendous dream.

In the fantasy, my aging father–dressed in his favorite Champion t-shirt with stains covering the front–marries my wife and I like he did 42 years ago but, this time around, the my 92-year-old ex-clergy dad forgets his lines causing me to coach him through the event with hints like: “ask for the rings, ask for the rings.” All the while, my best man sings Sonny and Cher’s, “I Got You Babe.”

Finally married, my wife and I end the ceremony with a kiss. But as I turn to exit, my eyes catch a glimpse of the bridesmaid who is no longer my wife’s best friend but now Gal Gadot from Dell Comics and Wonder Woman Fame. She is dressed in full Wonder Women regalia and looks totally shocked by the whole affair.

My mother turns to my father (now in the audience) with a quizzical look and says, “Dad, look at that bridesmaid. Isn’t that Superman?” She doesn’t get out much.

As we exit the church, and the bubbles fill the air–no one uses rice anymore—my wife ignores the limo and takes off on a sleek motorcycle, leaving me in the lurch—hence the cover.

Sure, it’s sounds crazy. But, in truth, isn’t the world of marriage crazy these days? In my case, what would one do when faced with the prospect of losing their beloved wife after 42 years? At age 67, would they remarry? Would they even want to remarry? These and other marital tidbits are discussed with humor and as much reverence as I could muster.

P.S. The author pairs up with Wonder Woman again in a final bit of photo wizardry Why? How? How are tricky copyright infringement laws avoided? Read Jay Got Married and find out.

Get “Jay Got Married” from Amazon