Book Tour The Son of Light 2.1: The Fierce Fellowship Games 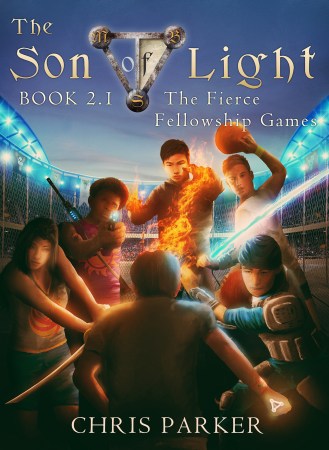 Title: The Son of Light 2.1: The Fierce Fellowship Games

Joshua Suzuki is once again in the loving arms of his older brother, Nick. Putting his concern for the Demon Lord, Hexen aside, Josh focuses on the exciting event that his brother has placed him in—The Fierce Fellowship Games. For once Josh can be a normal teenager and have fun. But he soon finds out that even in the M.B.S. Guild, fun comes at a price.

The 9 Lieutenant Governors all have their own idea of “fun” that involves dirty politics, sex, and an obsession for absolute power. And unfortunately for Josh, he’s caught right in the center of the chaos. Get ready for this character driven novel by Chris Parker because The Fierce Fellowship Games are here.

My name is Chris Parker and I am the author of, The Son of Light. I suppose you want to know a few things about me. Why I’m a writer? How did I come up with the story? Well, let’s wind back the clock to 2006.

In 2006, I began taking my writing more seriously when I wrote a four part book series called, Battle of the Gods. Battle of the Gods was based off my high school and community college years in fantasy form. I kept working on them until 2010 to 2011ish. During those years, I discovered that I really enjoyed writing, despite never publishing my stories.

Speaking of 2010 and 2011, that was when I was a film student. In 2009, I moved from Riverside, CA to Northridge and attended a private film school, Columbia College Hollywood. It was during this time where I began sowing the seeds for The Son of Light (even though I didn’t know it at the time).

I was an insane student—obsessed with taking over the school, YouTube, and Hollywood (good times). In my obsession, I created Lord Hexen and Lord Damen—two Demon Lords bent on world domination. Later on, I would go on to created a short film series, War on CCH (Columbia College Hollywood), featuring these Demon Lords locked in a war with the defenders of the school, The Students of the Art of Energy (A long title, I know).

But in 2012, two things happened that changed the story of The Son of Light forever: I made a 20min film and joined an organization called Circle K International. By this time, I had dropped the title, War on CCH, and went with, The Son of Light. Well, really the script used to be called, Brotherly Hate, but that’s a longer story. Basically, I took the characters from my previous story and, with some inspirations from Circle K International, made a new story.

Now here’s why I chose to focus on my books rather than film. During the years of 2013, 2014, and early 2015, I worked as a freelance video editor. I got screwed over and found out that the film industry was an extremely shady and dirty place. By February 2015, I had had enough! I said, “Fuck this!” and went into writing novels again—which was the last thing I wanted to do. Since then, my life has improved and now I’m a full time writer. Now it’s just my lovable characters, my story, and me. Well, that’s my story.